A recent query from a reader finds me musing on the subject of destiny…was becoming a dog trainer my destiny?  How did I end up where I am today?  Does a person have to grow up on a farm with a dozen “Lassies” to understand the canine species?

It is my hope that through these dog training related articles you will learn how to do what I do.  So, in terms of broadening your understanding, I figured I’d tell you a little bit more about how I got to be where I am today.

While being raised by wolves would have been a pretty thorough introduction to dog mind, it was not my introduction.  Neither of my parents had ever had a family pet, and it wasn’t until the summer after my 4th grade year that we got our first dog, a Cairn terrier named Sparky.  Now to say that we were totally unprepared is an understatement, and, poor dog, I think that our ineptitude made quite a dent in Sparky’s terrier brain.  He had QUITE the problem with other dogs, and if he had ever gotten off leash he would have run off into the wild never to be heard from again.  Still, that kind of behavior is often considered to be the way a terrier works, which made it excusable (albeit annoying) in the eyes of our friends and family when Sparky would, for instance, steal the napkin you had just dropped on the floor and try to basically kill you in defending it.  Many of my relatives have Sparky-induced scars on their ankles, making him an occasional topic of conversation ten years after his death.  Oh, don’t get me wrong, he was a very loving dog – when he wasn’t trying to kill you.

And for those of you who are keeping track of this sort of thing, all of the obedience training that we did with Sparky was dominance-be-the-alpha-dog based, with choke collars, alpha rolls, and, yes, biscuits, though it was mostly focused on “correcting” undesirable behavior.  We had classes, private instruction, read books, etc.  So, trust me…we tried.

Flash forward several years, to when another dog found her way into my life when I returned to the Northeast (I attended a University on the west coast).  She was full of energy, and her name was “Tootsie” (which I quickly changed to Nola, following the Monks of New Skete approach of giving a dog a name with open vowel sounds).  A brief history of corporal punishment from her previous owners left her rather skittish around other humans (except me, for some reason), she pretty much wanted to kill about 4 out of 5 dogs that we encountered, and she had a tendency to run off into the woods, leaving me wondering if I’d ever see her again.  Hey, but other than that – she was a great dog!  High drama, to be sure (remind me to tell you about the time that she was kidnapped), but a great dog – and, for whatever reason (call it destiny?), we had a bond.

But oh, those little quirks did demand some attention.  I attacked the problem with all of the fortitude and perseverance that a college graduate could muster.  Stacks of books, tips from other dog owners, advice from trainers, and hours of time spent together.  I quickly moved from my Monks-of-New-Skete approach to methods more focused on positive reinforcement (of course Nola was scared of the clicker, so I had to find a way around that problem).  Over time we got all of the obedience basics, but no matter what I tried I could not help her with her anxiety, or her seeming desire to hurt other dogs.  At one point I had a correspondence with a well-regarded dog trainer whom I contacted via the internet, and he thought that the solution to Nola’s aggression issues was to have her euthanized.  Well, yeah, I guess that would work!

At that point, I thought that Nola just had some issues that, for whatever reason, she’d never get over.  And I started to see that there were limits to what you could do with training.  Those limits become obvious to you when a technique just doesn’t work, or you notice your dog retreating emotionally, or the trainer suggests that you should kill your dog (or, more innocently, that there’s nothing they can do for your dog, because your dog is the way she is).  I did what any dog-loving dog owner would do in this situation…I coped.  And waited for destiny to work its magic.

Sometime during Nola's sixth year I decided to foster another dog, Buddy, so that Nola could have a chance at some canine companionship (I was a bit misguided, but I'll have to explain that in an upcoming article).  Now Buddy had an uncontrollable urge to chase anything that was moving (which was a problem if he happened to slip his lead, as we lived in the middle of the city), and for whatever reason, no matter what I tried, I just couldn't tap into this primal urge of his to...make prey.  On everything.  It was back to Google for me, to try and find some solution to the problem.

That was how I stumbled upon Kevin Behan's website.  Everything I read on his site made sense, not just in terms of how he explained dog behavior, but also in the way that his ideas just resonated with me on some core level.  What he described was a way of tapping into a dog’s deepest instincts and seeing the world through their eyes (or, more accurately, feeling the world through their heart). Rather than looking for ways to suppress a dog’s natural energy, he spoke of channeling it into obedience behaviors.  He had redefined (for me) how to harness a dog’s social energy, and I wanted to find out more.

I ordered Kevin’s book, and read it cover-to-cover.  We had some phone consultations about Buddy and Nola.  The two-dog thing wasn’t working out in my household, so Buddy ended up in a new home (not before making his mark – see photo); however, Nola and I made the trip to Vermont for a weekend to experience Natural Dog Training first hand. 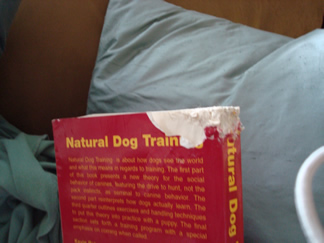 In that weekend, I discovered enough to know that I wanted to experience more.  Kevin and I talked about the potential for an apprenticeship, and personally I decided that, even if I wasn’t “destined” to become a dog trainer, it would be worth it for me to spend as much time as I could with this guy, to absorb as much as I could about how he viewed the world (and how dogs fit into the big picture).  Kevin’s theories encompass the meta-physical, as well as the physical, and throughout my life, as I’ve encountered people who seem to know what they’re talking about in that department, I’ve learned to listen.  So many months later I found myself in Vermont with Nola, again – this time for an intensive, month-long, 7-days-a-week, 8-hours-a-day (with some breaks, of course) training in life and dogs.

It was an amazing month, to be sure.  While I did learn a lot of specific techniques, I also came to an entirely new understanding of how dogs experience the world.  Seen through this lens, certain behaviors that had perplexed me suddenly made sense, and I saw how dogs really were never “wrong”, how they were simply responding to the stimulation that the world was giving them.  As humans we tend to judge others (both within and outside of our species) through our own prejudices – dogs, on the other hand, while it’s arguable whether or not they can learn the difference between right and wrong (same can probably be said for humans, actually), they definitely know what FEELS right, and what feels, well, not-quite-so-right.  It’s through this understanding, and the way it changes our interaction with our dogs, that our dogs not only become more obedient, but also they become attracted to us – because WE know the best ways to make them feel good, relieved of stress, and satiated at the deepest level – something only a moose could have done before.

By the end of my apprenticeship, things had clicked into place.  Techniques were cemented, as was a new way of seeing the world.  I had worked with dogs of all shapes and sizes, including Nola.  And Nola was much more settled, much more attentive, and much better around other dogs – with the potential to be friendly with almost every dog we encounter.  She was, in a word: cured.  (yes, you CAN teach an old dog…)

Since then I’ve worked with many dogs, at times full-time, and at other times fitting in training around my “day job”.  I’m always learning something new from my canine friends and the people who love them. Generally, the dogs always get it – it’s the humans who often need a little more work.  But my clients who are open to looking at their dogs in a new way are successful, both in terms of overcoming issues that they were facing with their dogs, but also in terms of learning a way of interacting with their dog that makes much more sense – to both them AND their dogs.

So, how about YOU, my friends?  Tell me more about how you got to be where you are, in your life in general, and in your relationship to our canine companions.  And as always, if there’s something specific you’d like me to talk about in a future post, please let me know.

How to play tug of war with your dog - and have the happiest dog on the block.

Dog Training: How to be calm, assertive, AND relaxed - be the moose!