So my friend Lou Frederick came out from L.A. to help as our cameraman/director/person who actually knows something about how to make a DVD, and, fortunately, we had an EXCELLENT weekend for filming the Natural Dog Training DVDs.  Sure, it was a little chilly (that's to be expected at the end of October in Maine) - but the sun was out, and the edge in the air kept everyone energized (if not a little purple).  Filming is complete, and now we move on to the next fun phase of the process:  EDITING!

We spent 3 full days out in the fields of South Portland, getting as much of the Natural Dog Training work, with as many different angles, as we possibly could.  We had several dogs, courtesy of several of the MANY kind people who responded to our casting call.  That was especially interesting - doing our best to convince these more-or-less-totally-green dogs that I was the biggest best moose on the block, while they were keeping their eyes on the cameraman.  Think about it - slow, stalking, big eye - what could be more predator than that!?!?  I did reassure Lou that the dogs would be on-leash at all times, in case I had to pull one off of him.  Luckily that didn't happen.

I think that we did get some great "newbie dog" footage - so you'll get a good sense of how most of the NDT techniques, especially pushing, will look in the beginning stages.  And then Nola, in her 11-and-a-half years of exuberant glory, will show you the rest.

I'm reviewing footage as I "capture" the HDV from tape onto a hard drive, where it will reside for editing.  I'm really excited about what we got - and I think you'll be as well.  We got some great heeling footage for that section on the Obedience DVD.  And while I haven't seen it yet, I'm REALLY excited about some of the more "advanced" recall exercises - which I hadn't even planned on including.  We decided, on a lark, to see how far we could get before the sun went down on our last day of shooting.  That was the one day when Mother Nature decided to be kind to us - plenty of sun and almost no wind - a perfect day.  Hopefully some of that will come through on the DVD as well...especially for those of you in the colder climes.

Anywho, I just thought I'd give you an update on our progess.  Thanks to all of you who have been pre-ordering the Natural Dog Training DVDs!  You're definitely helping convince me that this was the way to go.  I'll leave you with a photo of a test shot that we did at the field before filming.  Nola dives for a tug toy, while my pregnant wife, Tonya, and son, Dash, look on.  Just another fall day in Maine. 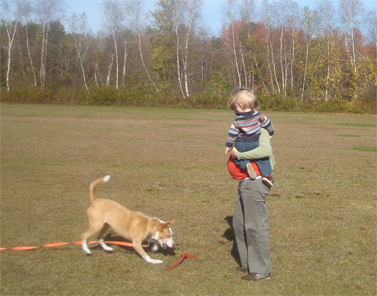 Family poses on the set of the Natural Dog Training DVDs

Review of Personal Development for Smart People by Steve Pavlina