I hope that you all enjoyed the story about Nola's kidnapping.  There's an interesting epilogue involving an animal communicator, but I'll save that for another day.  Today I wanted to give you an update on the Natural Dog Training DVD progress, since some of you have laid your money down, so to speak, and others of you are, I'm sure, just waiting to know that the DVDs have merit.  Wonder no more, and read further. 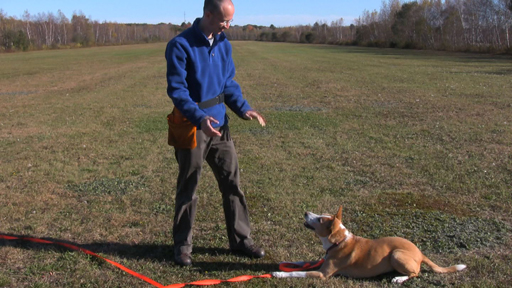 So I think that I might have mentioned that we recorded over 6 hours of footage over 3 days.  The footage falls into one of 3 categories (for the most part).  Either it is

Fortunately, most of the footage ends up in the first two categories.  What I've been doing with the more than 300 takes is going through each one, labeling where it belongs in the DVDs, and, in the case of the long shots, breaking it up into smaller clips and labeling each of those.  I detail the scene number, the angle, the subject matter, etc.  Save and then onto the next clip.  It is, most assuredly, NOT the most glamorous work.  But my friend Lou, who shot the footage, assures me that this time will pay off in more efficient editing.  Since he's going to be the one doing the final editing, it works out really well for him!

While it has been a bit laborious, at the same time I've really been enjoying revisiting our "shoot days".  There's some really great footage, and I think that it'll be really instructive for you, not just because we're going into some thorough step-by-step detail for the techniques, but also because you'll be able to see the greater arc of how Natural Dog Training techniques inspires a different human-dog dynamic.  Many of you have experienced that already, I believe - but even so, if you're like me then sometimes it helps to be able to look at the video and say "a-ha!  I'm doing it right."  Or "oops, let me try that again."

So I'm nearly wrapped up with this phase of the process.  Just a few more days and EVERYTHING will be labeled.  The only other thing that I'll have to do is record a first pass for all of the voiceovers - the things I'll be saying off-camera while the action takes place on screen.  That'll help Lou pace the editing that he's going to be doing.  Soon I'll be able to ship everything off to him for the next phase.

I'm almost 100% certain that we will be able to start sending DVDs sometime in January.  I'll of course keep you up-to-date along the way, with where we are.  And I promise that the wait will be worth it.

It's interesting.  I guess this is a time of year for "birth".  Some good friends of mine just welcomed identical triplets into the world.  Just this Sunday.  Amazing.  And we're expecting our new daughter to arrive sometime in early December (could be next week - could be 4 weeks from now...due dates are, of course, an inexact science).  And, among other "new life", the Natural Dog Training DVDs are gestating - giving me little kicks each night - until, soon, they'll make their way forth.  With a life of their own.

A simple blessing for all of you.  Thank you, as always, for your support.  And may you also experience some new life over the next few months.  Especially for those of you heading into winter.  Since it does, after all, keep things interesting.

The Day My Dog Was Kidnapped