A little while ago, I was contacted by someone from Grandma Bowser's All Natural Dog Treats, asking me if I'd be willing to review their dog biscuits on my blog.  Those of you who are regular readers know that this is something I rarely do (if ever), but with my aging pup Nola (13+ years old) showing some signs of slowing down, I've become more interested in how diet affects our dogs' health.  In fact, I have a more thorough "trial" going on with feeding Nola a lightly cooked diet that I'll be telling you about soon.  In the meantime, though, I figured "what the heck" - and I had the folks at Grandma Bowswer's send some treats along so I could give them a literal spin around the block.  I used one of the packages for the taste test, and I have another unopened package to give away (see the end of this review for details). 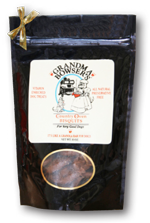 I opened up a package of their Peanut Butter (wheat-free) treats.  And noticed that they smell and look like peanut butter cookies.  Apparently these dog treats are cooked using human grade ingredients, though I'll admit that I didn't try one.  I pretty much got "trying dog food" out of my system when I was in my early teens.  Anyway...

I gave Nola a cookie.  She gobbled it up without hesitation.  Truth be told, though - Nola will eat just about anything.  So I decided to head out to the streets of Yarmouth, armed with a bag of treats and my two kids in a stroller, to see if the random dogs I encountered on our walk would have the same eager-to-gobble reaction.  Bringing my children was a strategic decision, since I didn't want to be "that creepy guy offering dogs treats at the park".  No, I wanted to be "that creepy guy with kids offering dogs treats at the park."

All-in-all, we encountered about ten dogs on our walk.  A decent sample size.  Of those ten, half of them eagerly gobbled up the Grandma Bowser's peanut-butter treats and came back for seconds.  One of those dogs supposedly never likes anything with peanut butter, so their owner was most shocked to see their dog scarf down the cookie in a matter of moments.

Of the remaining five dogs, 3 of them seemed interested in the cookie, but preferred to carry it with them instead of chowing down right there.  Hey, I understand, sometimes I like to enjoy my guilty pleasures in private too!  The owners seemed convinced that the cookies would be consumed at some point in the future - and I called them back later to confirm.  No, just kidding, I took their word for it.

Two of the dogs turned up their noses.  And then they gave me that "seriously?!" look.  I'm not sure what that was about.  I mean, these treats are self-described as "like a Granola Bar for dogs" - and who doesn't like a granola bar?  I suppose it's possible that these dogs just weren't hungry, or needed something with additives/preservatives to match the crap that they're getting fed at home.  I'm not going to try to pretend that I never traded my granola bar for a twinkie, after all.

I think that these Grandma Bowser's Natural Dog Treats would make a decent between-meal snack for any dog.  Something to casually flip to Fido when you're feeling particularly generous, or when Fido is feeling particularly snacky.  Personally, when it comes to doing actual training, I would probably prefer something with a 100% success rate (and I actually have a secret weapon that I'll be telling you about shortly), but 80% is excellent!  In fact, don't you even have moments when one of your favorite treats isn't quite doing it for you?  And I think that these are really meant to be "treats" - not something you'd give your dog handfuls of when you're doing a session of pushing in the park.

Just to be sure the first time wasn't an aberration - I just gave Nola another one.  She chomped it down without hesitation.  Good girl!

My only real criticism of this product is that the packaging could stand to be modernized a bit.  This change would be purely to their benefit, I think.  I understand that with a name like "Grandma Bowser's" they're probably trying to go with an old-fashioned motif (the biscuit pouches even came with a ribbon attached) - but the graphic design of the logo on the packaging looks like it was printed on someone's old dot matrix printer.  There was also a typo on the label.  And when you're married to a professional copy-editor, those kinds of things just jump out at you and say "Really?  You couldn't have proof-red read this one more tymetime?" note - my wife is actually much too busy to copyedit my posts on the Naturaldogblog

But all in all, these treats seem tasty, healthy, and a great snack for your pampered canine.

If you live in Pennsylvania it appears that you can pick up Grandma Bowser's at several stores throughout the state (listed on their website) - but most of their business currently revolves around selling their biscuits on-line direct-to-you through their website.  Their ingredients are produced in America, and consist of things like: Chopped Dates, Carrots, Yucca, Cranberry, Blackstrap Molasses, Garlic, and Pumpkin.  Sounds like Grandma Bowser's for dinner tonight, honey!

Oh, and the giveaway!  I have a fresh package of Grandma Bowser's original recipe (these DO have wheat in them), and I would be delighted to send them directly to you - IF you are the person I randomly select from all of you who leave comments for this blog post.  So leave a comment, and I'll select a winner at-random by Monday August 23, 2010.

One last note - have you had a chance yet to check out my new 8-week course on DailyOM - How to Speak So Your Dog Will Listen?  We're still in the Top 10 - for the third week in a row!

Want to actually discuss this review?  Head on over to the discussion thread at the NaturalDogBlog forum!  But don't forget to leave a comment here to get your chance at a free package of biscuits!

(full disclosure:  while I received free product to review and give away from Grandma Bowser's, I am otherwise not being compensated for writing this review - nor will I receive any compensation should you decide to buy treats from them.)

How to Speak So Your Dog Will Listen