When I started the Natural Dog Training blog, there was hardly any information on-line about how to use Natural Dog Training with your dog.  So starting this blog was a bit of an experiment for me - would you even be interested?  How effective could a "blog" be at teaching you a completely new way of working with your dog?  I've received excellent feedback and questions from you, which has guided the content - and the subsequent e-mails describing changes that you've experienced with your dogs has been really rewarding for me.

But my written descriptions, as thorough as I try to make them, are simply words on the screen.  I've been REALLY excited to hear from people as they start working with the Natural Dog Training DVDs, because I had a feeling that video instruction would be leaps-and-bounds ahead of the written instruction for getting results fast.  And for not only experiencing a change in your dog, but also experiencing the internal change, within you, that comes from adopting a completely new perspective on "how our dogs work".

So, meet Cliff and Anne.  If you read the press release about the "official arrival" of the Natural Dog Training DVDs, you saw a brief quote from them.  Their dog, Lenny, apparently has a tendency to snatch things - and to react aggressively when they try to get them back.  He's also "food aggressive".  Cliff and Anne had pre-ordered the DVDs, and in a cool twist of fate we were all attending the same wedding in Vermont a few weeks back - just after I had received my shipment of DVDs from the presses.  And I happened to have a few copies in the car with me, to show off to - well - anyone who cared.  So though it was totally unplanned, I was able to hand-deliver the first copy of the DVD set to leave my hands.

So a week later, here's the e-mail I receive (with some pics to follow).  It illustrates perfectly the transition between "old way/new way of responding":

As I was preparing dinner for friends tonight, Lenny started getting restless. He was kind of resting when the garbage men came. After he "chastised" them, I noticed that he was up on the dining room table, just looking for trouble. The table was clean, but I took the placemats, just in case.

I decided to let him outside, so I invited him to go, but as we passed through the kitchen, he made a beeline for a big pile of cut vegetables that I had foolishly left unguarded on the counter.  Faced with a potential loss of a good portion of dinner (to say nothing of all that chopping), I swung the placemats in my hand around to "block" him. In the process, I winged him on the nose. He got off the counter, and didn't growl or anything. He just gave me this "look".

Suddenly, "epiphany"! I think if he could speak he would have said
"*Please* take my energy!" I immediately ran him outside. First we had a dog-wins game of tug. Then, I invited him to jump up on me. He did so with gusto-- biting my ears, licking my face, etc.-- and he is normally very reserved. Afterwards, he laid down and fell asleep. For the last 2 hours, he has been calm, obedient, and mostly, asleep.

I'm not the world's most mystical guy, but I definitely felt an emotional connection (if not a physical one) as he (*ahem*) gave me his energy.

The point (finally) is that you may want to indicate that the feeding/ pushing techniques, and subsequent energy discharge, may be useful outside of training or dinnertime.

And a few days later:

I know Rome wasn't built in a day, but Lenny seems to be undergoing steady improvement— at least he likes to hang out with me, waits patiently until I'm done with whatever, is more generally relaxed (also asleep), doesn't snatch as much and gives it up easier when he does, and SO forth. If he gets antsy, I grab a handful of chow and push 2-3 times and brief tug. He can still be a rascal, but, as said, much improved. I was ready for months of work and didn't think it'd happen so quickly. Well, we'll see when winter rolls around and there are no squirrels/rabbits/chipmunks to stalk and chase and we're cooped up inside for longer stretches.

And one final illustration of how it all can work (this is a couple weeks later):

Today I picked Lenny up from his kennel vacation. They said he did very well, played with other dogs and is welcome back any time (!)

We ran some errands, and just as we got home, all heck broke loose.
Mainly, my IT guy came over, and I put L in the yard rather than have IT go through "the routine". L fell asleep in the sun, but got excited when IT left, mail came, etc. I finally had time to play with him in the yard. I grabbed his tug toy, and as soon as we got outside BAM! We played for a few energetic minutes, I rubbed his chest while he zoned out, and then he followed me inside and fell asleep-- where he is still 2 hours later. Talk about that release of energy. . .

And some photos (photography by Cliff Abrams) - you can click on them to see a larger version: 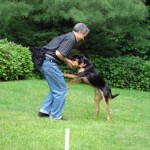 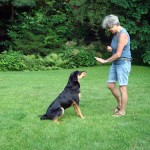 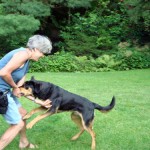 I really look forward to hearing more as you work with the Natural Dog Training DVDs.  It's fun, and you will see a difference - both in your dog, and in yourself.  So please do drop me a line to let me know how it's going!

It's official - Natural Dog Training: The Fundamentals is here!